Finishing the job of ending poverty in South Asia 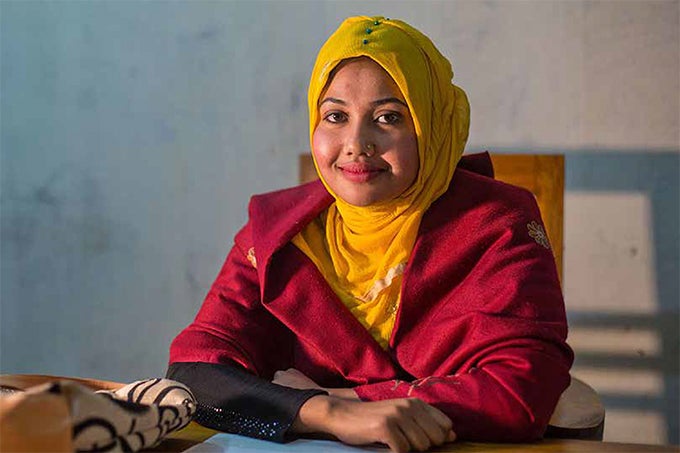 This Bangladeshi woman was born in poverty. With the right kind of education, life in poverty quickly became a story from the past for her. Credit: World Bank

"I have a four-year-old son back in my village. I want to make a better life for him,” says Sharmin Akhtar, a 19-year-old employee in one of Dhaka’s many flourishing garment factories.

Like thousands of other poor women, Sharmin came down to Bangladesh’s capital from her village in the country’s north to seek a better job and create a more prosperous future for her family—leaving behind a life of crushing poverty.

Today, as we mark End Poverty Day 2018, it’s important to note that Sharmin’s heartening story is one of many in Bangladesh and the rest of South Asia, where economic growth has spurred a dramatic decline in extreme poverty in the last 25 years.

Even more remarkable, South Asian countries experienced an increase in incomes among the poorest 40 percent of 2.6 percent a year between 2010-2015, faster than the global average of 1.9 percent.

On a global scale, the highest concentration of poor shifted from South Asia to Sub-Saharan Africa in 2012 . And India is likely to be overtaken, if it has not already been, by Nigeria as the country with the most people living in extreme poverty.

It’s worth thinking about how far South Asia has come – but remaining clear-eyed about how far we must go to finish the fight against extreme poverty.

Indeed, it is increasingly clear that poverty is more entrenched and harder to root out in certain areas, particularly in rural areas and in countries burdened by violent conflict and weak institutions.

Estimates for 2015 indicate that India, with 176 million poor people, continued to have the highest number of people in poverty and accounted for nearly a quarter of the global poor.

True, the extreme poverty rate is significantly lower in India relative to the average rate in Sub-Saharan Africa. But because of its large population, India’s total number of poor is still large.

And while there has been a substantial decline in the numbers and rate of people living below $1.90 in South Asia, the number of people living on less than $3.20 has declined by only 8 percent over 1990-2015 because of the growing population.

Beyond monetary measurements, we also need to recognize that being poor is not defined just by a lack of income.

Other aspects of life are critical for well-being, including education, access to basic utilities, healthcare, and security.

For example, someone may earn more than US$1.90 or $3.20 a day but still feel poor if lacking access to such basic needs as adequate water and sanitation, education, or electricity.

In fact, the number of people in South Asia living in households without access to an acceptable standard of drinking water, adequate sanitation, or electricity—about one South Asian in five lacks electricity at home—is far greater than those living in monetary poverty.

And when factoring in all aspects of well-being, the poverty rate more than doubles in five South Asian countries.

This means that the challenge in securing higher living standards for the population of South Asia is far more daunting when poverty in all its forms is considered.

And while South Asia is expected to meet the goal of reducing extreme poverty to below 3 percent by 2030, many people will still be living in unsatisfactory conditions if the region does not make progress on other components of well-being.

We have made tremendous progress in the effort to end poverty, but the last leg of the journey will be the toughest.

To get there, we need more investment, particularly in building human capital, to promote the inclusive growth it will take to reach the remaining poor. Promoting opportunities for women and improving access to education and health services is vital.

We are adding new pieces to our understanding of the puzzle of poverty in South Asia and beyond.

This is a challenge that is not going away. We must sustain and accelerate the effort for Sharmin Akhtar and her family—and for all South Asians that seek a brighter, more fruitful, and productive future.